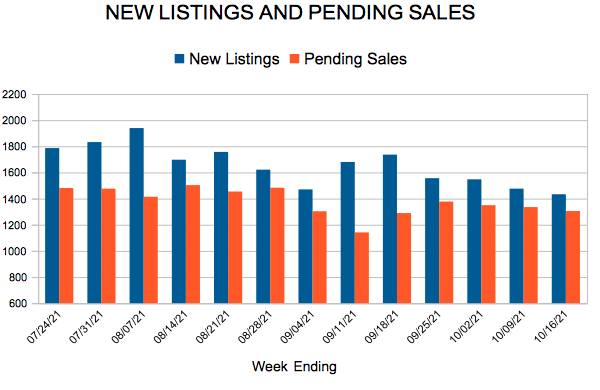 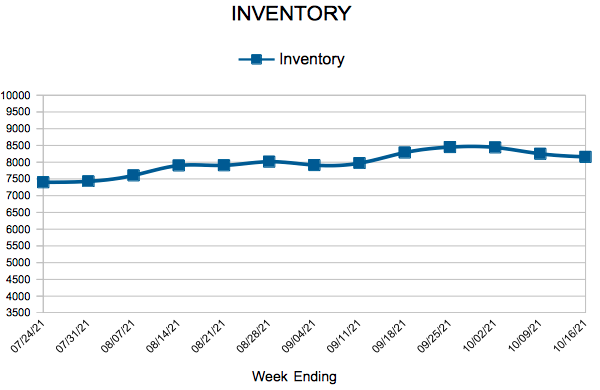 The supply of entry-level housing is at its lowest level in nearly five decades, according to Freddie Mac, who reports that entry-level home construction decreased from 418,000 units per year in the 1970s to 65,000 units per year in 2020. The shortage of starter homes has proven challenging to first-time buyers, as many existing entry-level homes are being remodeled or demolished and replaced by much larger homes, while those that remain have become significantly more expensive, with sales prices increasing 64% from 2016, according to realtor.com.

In the Twin Cities region, for the week ending October 16:

For the month of September:

All comparisons are to 2020

There are some signs of a potential market shift, even though both new and active listings are down compared to last year and sales are up compared to 2019. 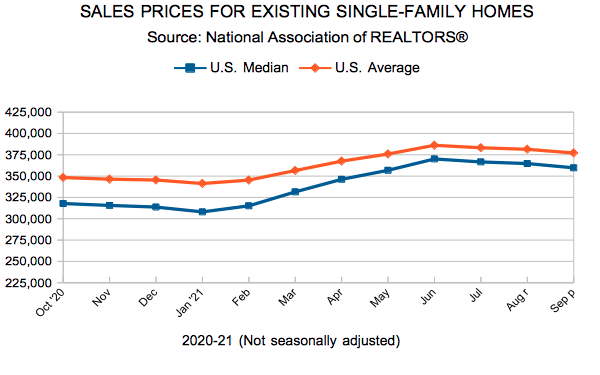 (October 19, 2021) – According to new data from Minneapolis Area REALTORS® and the Saint Paul Area Association of REALTORS®, buyers closed on 16.0 percent more homes in the Twin Cities metro area last month compared to September 2019. Sales were down 5.9 percent, however, from the heightened pace of September 2020. The trend still indicates rising demand, and suggests that much of last year was an outlier and unsustainable.

Both seller and buyer activity were down from 2020 but up from 2019. While the number of signed purchase agreements fell 14.4 percent compared to September 2020, the two-year growth from 5,047 purchase contracts in 2019 represents a 10.8 percent gain. That amounts to about 5.4 percent demand growth per year, a stable and healthy rate. Buyers remain active and persistent, though perhaps a bit more cautious. But because much of 2020 and 2021 are not apples-to-apples, year-over-year comparisons will continue to be distorted. 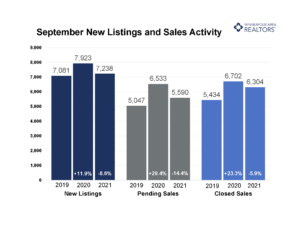 “We are still in a period where year-over-year comparisons can be skewed,” said Todd Walker, President of Minneapolis Area REALTORS®. “We’ve gone from March 3 to March 1—still a fast pace, but agents are seeing fewer multiple offers. Bypassed inspections and appraisal gap clauses are also less prevalent.” The metro area remains a firm seller’s market with just 1.5 months supply of inventory. That’s the lowest figure for any September going back two decades. Historically, five to six months of supply is considered a balanced market that doesn’t favor one side or the other—buyer or seller. 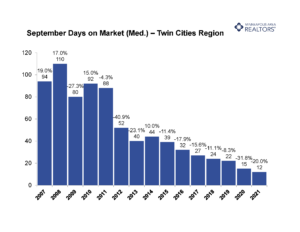 Seller activity declined 8.6 percent over the last year but rose slightly over the last two years. This is the region’s third consecutive year of September new listings exceeding 7,000, which hasn’t happened since 2007-2009. The median sales price for the metro rallied 10.2 percent from last year to $341,750. That’s shy of the $350,000 record high that held steady in June, July and August of this year. “While pricing remains firm, we’re at a time of year where activity typically slows down for the season,” according to Tracy Baglio, President of the Saint Paul Area Association of REALTORS®. “Even though we don’t quite see as fiercely competitive a market as last year or earlier this year, that doesn’t mean buyers suddenly have an upper hand, especially while sellers are still accepting offers over their list price and in record time.”

September 2021 by the numbers compared to a year ago

From The Skinny Blog. 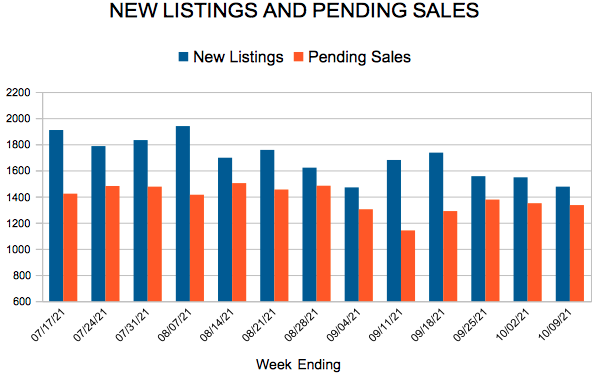 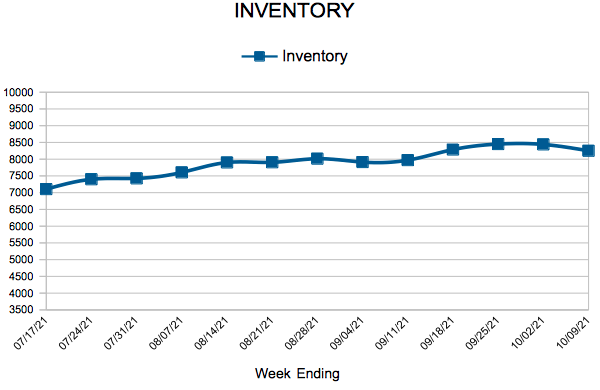 As home prices have continued to soar, many borrowers are finding they must borrow more to afford the rising costs of homeownership. Applications for jumbo loans — those loans that exceed conventional conforming loan limits established by the Federal Housing Finance Agency — are on the rise, and could reach $550 billion this year, according to Bank of America researchers, the highest level since before the 2008 financial crisis.

In the Twin Cities region, for the week ending October 9:

For the month of September:

All comparisons are to 2020 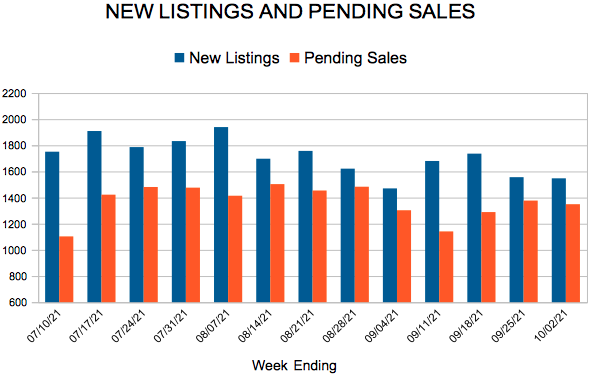